Bibimbap is the signature dish of both of the Koreas. It is a mixed rice dish that you can prepare with basically every vegetable left in your fridge. As long as it features sesame oil and gochujan sauce, it will have the typical Korean taste. Today we share our favorite vegan Bibimbap recipe.

I have traveled to both of the Koreas a couple of times and have always been a big fan of Bibimbap. So I am very happy I got to prepare this vegan Bibimbap recipe to present on VeganEvergreens.

In Korean, bibim means something like hustled or mixed. Bap means rice. So Bibimbap pretty much sums it up, as it traditionally consists of rice with leftovers and those leftovers were mostly veggies. Therefore, the vegan Bibimbap recipe is the authentic one. Nowadays however, modern variations with meat and/or egg and even seafood occur.

Featuring leftovers basically means that any type of veggies (that exist on the Korean peninsula) can be used, but it’s hard to encounter a bibimbap without spinach and carrot. Beansprouts are a usual suspect as well. We chose to complete our vegan Bibimbap recipe with shiitake mushrooms and scallions.

So what is it that gives this dish its characteristic taste? Ofcourse the sesame oil and the short grain rice (sushi rice) gives it a typical East Asian touch. But it’s the gochujang sauce that – in my humble opinion – makes bibimbap stand out.

It’s a sauce made of fermented soy bean with glutinous rice, chili powder and some malt barley. The fermentation gives the sauce a unique taste.

As it is used for marinating as well, Korean households always have gochujang in stock. That is probably why it serves as a condiment for Bibimbap, Korean’s leftover rice dish.

But even outside of Korea you’ll be surprised at how many locations you will find gochujang. Even many regular (not specified) supermarkets sell small containers or bottles of this magic sauce.

How to serve this vegan Bibimbap recipe

Another secret of the increased popularity of Bibimbap is that it looks so colorful and thus teases the appetite. Ingredients are prepared sequentially so they can be presented side by side.

The mixing of the ingredients is often done by the chef at the table in front of the guest.

For the gochujang sauce

How to make the gochujang sauce

How to prepare the veggies

For a nice presentation, take a bowl and add rice in the shape of a pyramid: the top is in the middle of the bowl leaving room on the side.

Place the veggies in groups such that the colors contrast. Put some nori (seaweed) in between the veggies if you like. Finally pour the gochujang sauce onto the rice. And last but not least: sprinkle with some black and white sesame seeds.

Serve and mix with a tablespoon after serving out. Add extra sauce to your liking — we did for sure!

What do you think of this vegan Bibimbap recipe? 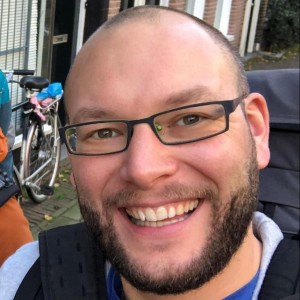 Tim likes cooking. A lot. Tim was also 'on his way' to becoming a vegetarian for the better half of the last decade, until he met Jolanda in 2018 and became vegan overnight. Happiest on a food market in Asia, or in any kind of cafe that serves a proper double espresso. Cooking motto: "No garlic, no glory."